Muniba Mazari, An Artist,Philanthropist who currently serves as the National Ambassador for UN Women Pakistan and has participated as a motivational speaker at various conferences and forums, her first break being TEDx Islamabad. She was one of the two Pakistanis to be named BBCs 100 most inspirational women in 2015, and works as an occasional anchor at PTV, being their first wheelchair-using anchor. Additionally, Muniba is the first wheelchair-using model for the Toni&Guy in Pakistan, featured in Forbes 30 under 30 in 2016, and head of CSR for Chughtai Labs. 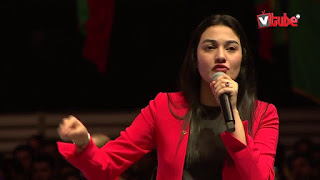 "My Husband somehow slept and my car fell into a ditch,” shares Muniba, while recalling the accident that would change her life. My husband was lucky he managed to escape but I couldn't."

Today, Muniba is an accomplished artist, works two jobs, is a single mother of an adopted son (who completes her life) and she’ll be representing Pakistan in the prestigious Forbes 30 under 30 list of top promising young leaders, daring entrepreneurs and game changers from around the world. She’s also a UN Goodwill Ambassador for women to advance gender equality and the empowerment of women and girls. Her message for Pakistan on behalf of disabled people is worth spreading on social media: “Before you ‘dis’ our ability, always remember that a person who is differently abled only needs your empathy, not your sympathy!” #MunibaMazari #ExtraordinaryPakistani